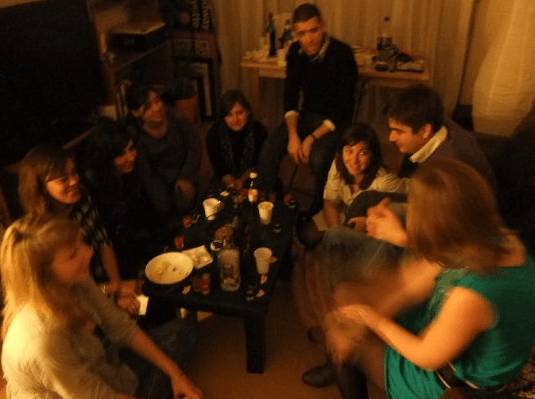 Partying at home vs Clubbing

Everybody goes clubbing nowadays for dancing, picking up, having a drink, meeting new people, having fun, having a small chitchat… Everybody crams around endless lines from Thursday to Saturday to book a table or the VIP corner, to enjoy themselves, loosen up, un-stress or de-stress and have fun. I am not saying there is no truth in these justifications, but what happened to the times when parties were held at people’s homes? When friends were invited over to have a drink, tell a joke, listen to some music, smoke maybe a cigarette or two, or three 🙂 , dance, have a coffee or glass of wine or something stronger and people would talk and then watch a movie,  eat some cake or popcorn ?

Where are the times when people weren’t so crazy about house, techno, electro and other similar types of music? When friends would gather at each others’ places and then sit around the table and talk about everything, consolidating their friendship?

I’m not saying, God, don’t get me wrong, that clubbing doesn’t have its advantages – relieving the stress, having fun after a long tense period or maybe a too quiet one, bachelorette parties, meeting new ‘suitors’ (although, let’s be honest here, how many couples managed to have a steady relationship after meeting in a night club?). But where are those beautiful nights when friends would sit over a glass of wine until sunrise?

What happened to the hospitality and improvised parties at home? Are they an attribute of the past ? Are they only associated with high school and college? Why, as the time passes and we move on to an active lifestyle, these types of gatherings become more and more rare?