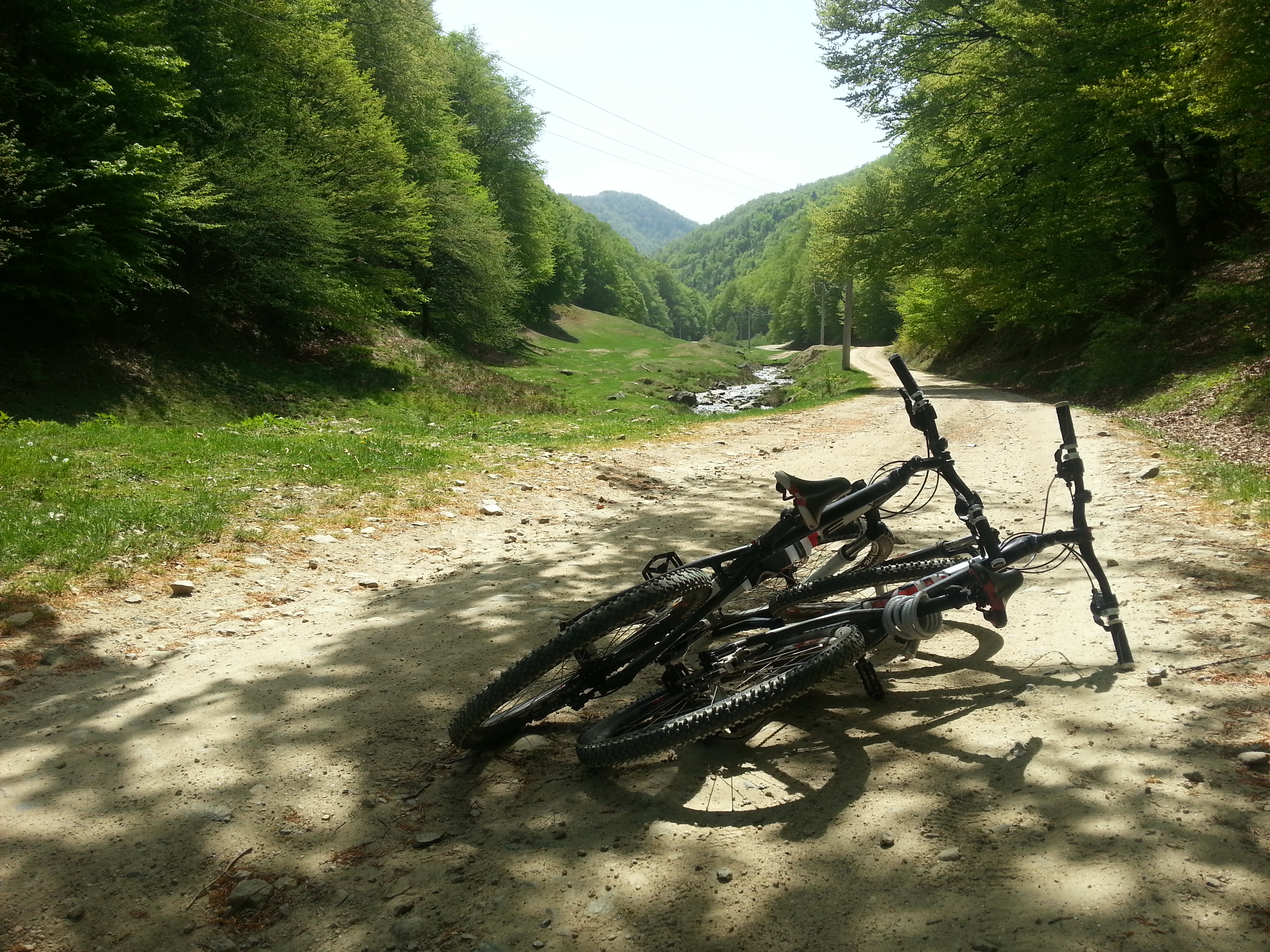 Biking in Romania: up, to Păltiniș

Since we are around Sibiu again, this time I`m gonna take you to Păltiniș. No, not using the regular road, but through the forest, where we can even pick some blueberries and raspberries. 🙂

This trail is heavier than the previous ones, as there are around 30-40 km of going uphill. The downhill part is done on the regular road from Păltiniș to Sibiu and it`s a real visual reward after all the previous intense exercise.

I must admit that it`s not the easiest route for orientation, as the forest road doesn`t have any markings or indicators. We realized this in the middle of the forest while trying to use the Maps application in order to find out where we were. Somehow we managed to get to Păltiniș, after some push-bike through the mountains, some off-road through a river and all, of course, while being accompanied by the usual deers. Later on, we even found out that the area is also populated by the bears but, fortunately, we weren`t so lucky. 🙂

Anyway, the route is absolutely gorgeous and I will try to come back here every time I will have a chance!

Time: for us it took about 5 hours, taking in consideration that we lost ourselves and we had many stops. The downhill part takes about 1-1,5 hours. So, let`s say, a total of about 7 hours.

Equipment: helmet, rainwear, wind-stopper, spare wheel room + bike pump, energy drink or any kind of high caloric food (as there are no supermarkets in the forest 🙂 ), water, SPF lotion for those who need and anti-mosquito spray, bike gloves.

Map: the forest road called “Curmătura Ștezii” appears not to be continuous on the maps but I did my best to mark a tour using Google Earth, which I highly recommend for you as well.

Here is the detailed map.

The route is quite long and complex, going through some parts of Cândrel mountains, a few forests and the saxon settlements Cisnădie, Cisnădioara and Rășinari. You can start the trail from Sibiu as well, but we decided to depart from Tocile, the place we were accommodated.

So, we left Tocile around 9am, passed through Cisnădie and then turned left to Cisnădioara. We didn`t hurry up too much, not only because there were many uphill areas in our way but also because of the horses that came for a photo session.

Once you reach Cisnădioara, you have to take right. Then the way will continue uphill through the next forest, Catrina forest. Don`t panic too much about the uphill cycling as about half way in the forest, the road starts to go downhill! 🙂

After about 5 more kilometers, you`ll intersect the road DN 106A, where you have to take left for Păltiniș. If I remember well, there is also an indicator there. So, up to here, nothing complicatedi! Actually, you`ll follow this road for another 8 km until you reach Curmătura Ștezii chalet. Then you`ll take the forest road.

Anyway, until there, the road passes through Rășinari village and has a continuous but smooth ascendent slope which makes it easy to go. I mean easy compared to what`s next…

Curmătura Ștezii chalet is not difficult to recognize as it is a big building, beige in color, with a red roof. Next to it, on the left, there is an unpaved road which follows a river – Șteaza river. That`s the forest road I was talking about. From now on, the most important rule is to follow the river and to take right where you reach a bifurcation. We took left at some point and I don`t even know where we got, to be honest. Anyway, somewhere in the forest. 🙂

Just in case, take a GPS or at least a mobile phone which has an usable Maps application.

The way back, as I previously said, is made on a main road – DN106A – from Păltiniș towards Sibiu. From the car it may not seem so amazing, but when you go by bike you can enjoy every landscape, fresh air or every little corner of green. And the visual relaxation perfectly matches the physical relaxation, as the road goes on a continuous down slope.

On this way you`ll reach again Curmătura Ștezii chalet, but from the opposite direction and from there on, the way is the same as the coming way: Rășinari, Dumbrava forest, Catrina forest, Cisnădioara, Cisnădie.